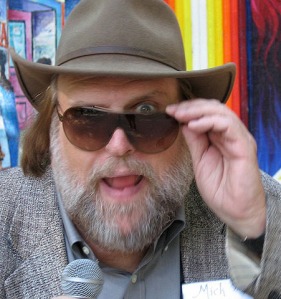 As leader of one of Sacramento’s best-loved blues bands, Mick Martin and the Blues Rockers, and host of The Blues Party, a weekend radio show, Mick Martin is the focal point of Sacramento blues scene. He has played in various local bands since the late 1960s, including Mick Edwards Blues Band; Joshua; Smith, Martin and Shaw; and the Onion Express. He was a music and movie critic for The Sacramento Union and is the co-author of Video Movie Guide.

How did you get introduced to the blues?
It was primarily through the British invasion and the Rolling Stones. “Little Red Rooster” was My first favorite song by them. Later on, they did a stint on Shindig, which was a TV show at the time, and they insisted that HowlingWolf appear with them. I saw him, and that did it. I went out and got the Rockin’ Chair album. It wasn’t much of a leap from there to Muddy Waters and Sonny Boy Williamson. It was like this great door opening. This began about a 35-year journey of really learning about playing blues. I always played blues in every band that I was in. Even when I was playing the teen centers, we’d be playing all of this stuff They’d want to hear soul hits and pop hits, and we’d play “Born in Chicago” or something by Charlie Musselwhite from his first album, and they’d just kind of stare at us.

When did you put out your first record?
In 1972, Wayne Smith, who had been in Joshua, and Robbie Smith-no relation- contacted me, and we put together a band that became Smith, Martin and Shaw. We had a single that became a double-sided hit. Jim wrote “‘Oh the Road,” and Robbie wrote “Blackness of Your Thoughts,” which caught the attention of Columbia Records. We went down and auditioned at CBS studios in San Francisco. But as youth, stupidity and shock at over making it would have it-they told us they liked the song, but not the words. So what did the band do? They changed the arrangement, and kept the words. To this day, I still don’t understand what was on our minds. That session at CBS broke up the band. So, I put together [the band] called Orion Express. We were one of the top attractions in Sacramento. The Orion Express broke up because the Shire Road Pub burned down in May 1977. All of our equipment was burned up in the club. I gave up. We had just put out an album called Orion Express We were the first unsigned band on the West Coast to put out its own album, and we took a lot of flak for it. That was the first attempt at producing a record for me. In between bands you’ve also kept up a career as a movie critic. How did you get started?By 1978, I’d gone to work for The Sacramento Union, first as the rock critic, then later as a movie critic. I really hated being the rock critic because I had to sit there watching other people do what I like to do. That’s a form of extreme emotional torture. I wanted to jump up on the stage and play rather than be in the audience. It was a good learning experience for me.

In Between band you’ve also kept up a career as a movie critic. How did you get started?
When I was hired, there was a big trend toward entertainment as the new thing in newspapers. The fact that I’d studied movies and records all of my life was very handy. But around 1985, they were shifting away from that, and they wanted me to do other things. Well, it became a real depressing situation for me. Just out of sheer frustration I created Video Movie Guide as a pamphlet. It actually looked like a screenplay with a cover on it. But because the people at Tower were kind enough to pick it up at a time when their video store was opening in New York, Ballantine Books saw it in the store, and we had a deal in a very short period of time. I had 800 reviews in my original pamphlet, and they wanted 2,500. We had to deliver that in four months. It was a bit of a challenge, but I’ve al ways thrived on challenges. And after realizing that it was possible to do something that overwhelming, it gave me the strength a couple of years later to say, “Okay, I’m going back to music. Because I’m a halfa person when I’m not playing. I don’t know how else to explain it.

How many movies do you watch?
Two or three a week. We used to have eight or nine movies a week and I’d cover them all at the Union. We were small but mighty~ I still love movies. I watch old movies whenever I can. I also collect old television shows from the 1960s when I was a kid. There’s nothing like watching Maverick and remembering what you were thinking at the age of 8 when you saw that episode.

How long has your current band been together?
Five years. I put together the first Mick Martin and the Blues Rockers in 1987. Now, we’ve got seven CDs, most of them featuring songs that Tim Barnes [from Stoneground] and I have written. It’s turned out to be a really nice partnership We just signed a record contract with JSP Records out of England. We’re almost finished with the album.

Your radio show The Blues Party provides a lot of information about the blues, and exposes bands that people haven’t heard of. Can you explain more about it?
I consider myself to be both an entertainer and an educator. At KZAP (where the show originated) I developed the idea of using Stevie Ray Vaughn, the Allman Brothers and the Rolling Stones as a hook to introduce people to the current crop of blues artists. A lot of people don’t realize that there’s still great music going on out there that they can enjoy; it’s just that it happens to be called blues.
I reversed the process at KXJZ. At first. there was no need for me to use a lot of what I consider to be crossover music. But I began to realize that there still needed to be a comfort zone for the listener. And I’ve expanded my listenership exponentially by the use of familiar artists. The idea is to show people that the blues isn’t some old guy sitting strumming a guitar that’s out of tune singing about woe is me.” To me, blues is the happiest music that exists. It don’t make any differentiation between Fleetwood Mac with Peter Green, and Buddy Guy and Junior Wells. To me it was great blues whether it came from Britain or Chicago.

Have you ever thought about moving to a more blues-friendly town, like Chicago or New Orleans?

I live a quarter of the year in England. I figure Europe would be a lot easier on us than going on the road in America. That’s broken up more bands than anything else. Over there you’re royalty. We’re on regular airplay in Belgium. The BBC did a national special throughout Great Britain on us-hosted by Paul Jones who sang “Doo Wah Diddy”- on Thanksgiving Day. So it continues to go there, while we’re here. Now, we’re signing contracts for the summer festival run in Europe, concentrating on England and Belgium. We did Italy last year, and I think we’re going to go back there as well.

How does it feel to be known in Europe, and not have near the notoriety here?
All I want to do is play music. I don’t care about the rest of it. I spent several years interviewing famous people. Fame is not some thing that brings you happiness. Playing music brings me happiness. When my father died on my 19th birthday and, even earlier when my brother died on my 11th birthday, I made up my mind that life was short, and what you want to get out of life-you can. I go to juvenile hall, I work with a lot with Placer County’ foster care kids and try’ my darnedest to explain to them, that the whole world is telling you1 “you can’t, you can’t, why bother, why try.” And the ones who do it, succeed. We do a harmonica-based series concert twice a year. I’ll go to juvenile hall and the foster care schools, not so much to teach them harmonica, but I want to shake ’em up. I will never ever regret the life I’ve led. I’ll have other regrets, but fail or win, I’ll never regret it.

Mick Martin came back to the Torch Club in downtown Sacramento on Friday, May 2 to celebrate his birthday and yet again show why he is one of the best acts on the west coast. And he did just that! Mick has been front man for the Blues Rockers since 1983 and hasn’t lost a beat, in fact he is better than ever. Mick’s stage appeal and attitude are remarkable, besides the fact that he is one of the best blues harmonica players around. Mick shared the “Best West Coast Blues Harmonica Player” nod with Mark Hummel in 2001. Above and beyond his musical talent, this guy can really work a room.

Mick made it known right from the start that he did have a set list and also that he had no intention of following it. Nice! Mick’s shows fun are full of really well written original blues cuts molded by years of experience. His vocal talents are unbelievable as he rolls through song after song all the while making eye contact with everyone nearby. Sometimes he sings directly to someone, usually a lovely lady, and seems to pour out his soul. When you watch Mick’s shows you feel like you are part of an experience and not just a member of the audience. His sets were full of great original rockin’ blues stuff including “You Cheated and Lied” and “One Foot In Front Of The Other” , as well as his smooth, soulful songs “What Is It About You” and “What Did I Do”. He did an excellent extended version of “Can’t Remember Nothin'”. Several times during the show we just watched in awe as Mick cast his spell on the club. It was an amazing performance.

After a night with Mick Martin and the Blues Rocker’s you usually wake up the next day wondering where he’s playing next and telling your friends about this amazing guy. Not to worry, he’s a hometown product and plays a lot around the area. As a side note you can catch “Mick Martins Blues Party” every Saturday at 1:00 PM on Sacramento PBS radio – KXJZ, FM 90.9. Mick was proud to tell me that every show is different and he never wants to be known for repeating stuff you’ve already heard.

The crowd grew to near-capacity – about 1,500 – during the performance by Mick Martin and the Blues Rockers… and by the time the temperature outside heated up, it reached the boiling point inside the tent at Turntable Junction (Sacramento Jazz Jubilee). Martin used his first two sets to play tribute to the blues greats. He drew material from Jimmy Reed (Bright Lights, Big City) and Willie Dixon (Back Door Man), and demonstrated the harp styles of Reed, Howlin’ Wolf and Sonny Boy Williamson.
Jim Carnes, Sacramento Bee